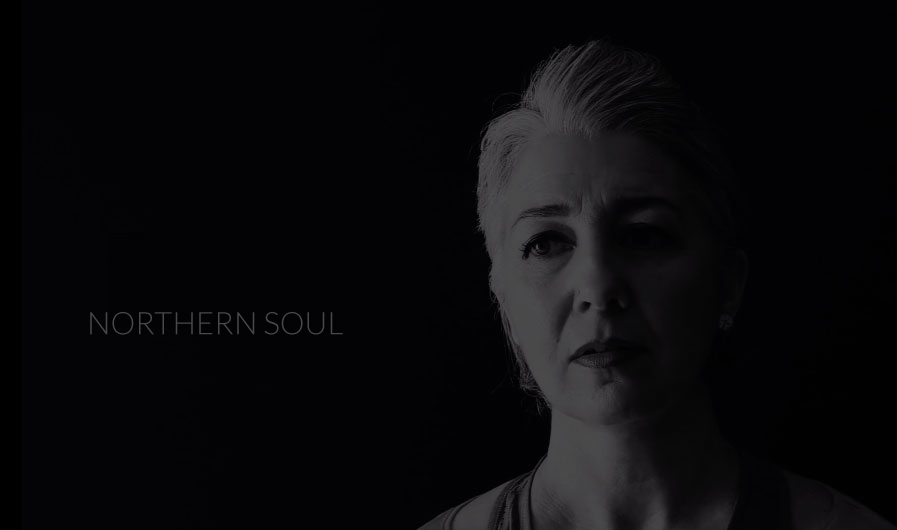 WATCH: NORTHERN SOUL WITH ZENA ME

“If you don’t know where you are going, any road can take you there.” – Alice in Wonderland

I first experienced being filmed by Nic Askew back in 2005. The resulting film, Hello Yellow Brick Road, was the start of my journey to finding my purpose. I believed that we all have a sacred purpose, something unique to contribute, and decided to explore what mine might be. The film led me to performing a one-woman stage show, based on William Bridges’ book Transitions, using film, music, storytelling and dance – and it’s fair to say it was life-changing.

So why go back again? Well, because I love film and needed to produce a video for my website and social media platforms. But when I met other filmmakers they just didn’t feel right. The format was too contrived, too slick and, to be honest, I’m rubbish with a script…

And that pressure to look good and sound good? It triggers my Pavlovian tendency to perform like a poodle, and I flippin’ hate it! I’m more your “let’s get down and dirty” kind of gal. I like spontaneity, improvisation and an element of danger!

Nic’s ‘Inner View Method’ involves no planning, no script –  just me being present, being in the moment, exploring what’s in my awareness and what wants to be spoken.

“No wise fish would go anywhere without a porpoise.”– Alice in Wonderland

I reckoned on Nic’s process being the best one to help me communicate my porpoise/purpose. Like the wise fish that I am, I find my porpoise hard to speak about; it’s beyond words. My attachment to my porpoise is deep and emotional. I connect to it somatically, through music, rhythm, movement, poems, stories, film, images and symbols.

In my one-woman show I told the audience I believe that our purpose and who we really are is connected to our family, our stories, our place of birth, our community and where we grew up.

I come from a very long line of mainly working-class northerners and Mancunians with a bit of Welsh and Irish thrown in. The social landscape, history, colourful characters and black humour are in my blood. I think it’s because of this that my curiosity and detective-like intuition always drew me to the darker mysteries that surround my family heritage. I was interested in the stories of the black sheep, the ones who were ‘missing’, and the rebels.

My quest to find out more led me to venture into the world of family (systemic) constellations, a process by which you can explore these mysteries and illuminate the truth of your heritage.

and bruised her Soul” – Alice in Wonderland

One of the mysteries in my family surrounded my maternal great-grandma. I never knew her name. However, one day in my early teens, I was privy to one of those rare family gatherings in a particularly small kitchen, which included my mother, her two sisters, my older cousin and me. The sisters began to ask questions…

Was it true she’d died in childbirth with another man’s child? Was it true she was a prostitute? No answers seemed forthcoming, but as I sat there shocked, confused and overwhelmed at what I was hearing, I felt a creeping fear of the unknown, of what was left unspoken.  Whatever this was felt like a dark cloud over my family, like a curse.

Then, while training as a constellator in April 2018, 100 years after her death, I found myself uncovering the truth of my great-grandma’s story through accessing the inquest file into her fate and the newspaper reports surrounding her death.

Her name was Alice.

“Her Own Wrongful Act”

In January 1918, it seems Alice had died through taking ‘mysterious pills’ to abort an unwanted baby. Although she’d succeeded in killing the baby, it hadn’t fully miscarried and as a consequence had poisoned her system, which led to her painful and tragic death.

The inquest concluded that the baby wasn’t her husband’s, as he was away at war, “fighting bravely for his country”.

Alice was identified as a Bad Woman and a Bad Mother who’d betrayed her husband while he was away doing his patriotic duty.

No one spoke up for Alice. In death she’d lost the right to defend herself and no man came forward to claim his responsibility.

But beneath the initial findings, what emerged was the clear divide and distinction between the patriarchal authorities (the coroner, the doctors, the press) and the poor, uneducated working-class people who were intimidated by them and their power.

One letter from a family member begged the court to remove the children from the Bad Mother. They explained:

“If you wish any reference as to my character, I refer you to Hollinwood Working Man’s Bible Mission and the Good Temperance Lodge in Oldham. These places are where me and my wife and family attend.”

The ‘official’ story in our family was that Alice had died in childbirth in 1918 while her husband was away at war. She was 31 years old and had left behind three young children.

The truth was that Alice’s fate was so heavy, it couldn’t be contained. It was too big, too traumatic, too painful and too frightening. So Alice had to be forgotten, hidden, covered up – some would say for good reason.

Alice was buried in an unmarked grave, along with her truth and her story.

“I’m not strange, weird, off, nor crazy, my reality is just different than yours.”  – Alice in Wonderland

Society was very different back in 1918. Alice’s heavy fate could have had dire consequences for her young children, so they were taken in by Alice’s husband’s family and helped by the Salvation Army. Alice’s widow John returned from war and quickly married again. Sadly both his second and third wives died after short marriages.

In excluding Alice, one of the consequences was that my grandmother, Alice’s daughter, who was six when her mother died and also named Alice, became entangled with her mother’s fate. This traumatic event led my grandmother to a lifetime of depression, mental and physical illness, which created toxic relationships and an inability to be fully emotionally available for her daughters, one of whom was my mother.

Those who pose the greatest threat – those who might expose the truth – can inadvertently become the black sheep, the scapegoat or the rebel and risk exclusion and their right to belong in the family system. However, the rebels and black sheep are those that are seeking to release the family tree of its repetitive, often toxic, patterns.

The truth of previous generations needs to be brought to light. By making it conscious and re-memberingthose that have been excluded, we try to avoid these entanglements being passed down through the generations. The descendants are then free to form and maintain healthy relationships and a family that is able to thrive.

Our communities, places, countries, institutions and organisations are no different; they too hold hidden secrets, unconscious events and old entanglements from previous generations. For us to create healthy human relationship systems, it’s time for us all to own our truth and lay these secrets to rest so we can be free to embody all of who we truly are.

I believe that people can thrive, but only in the TRUTH.

“You are the dream of all your ancestors.” – Bert Hellinger